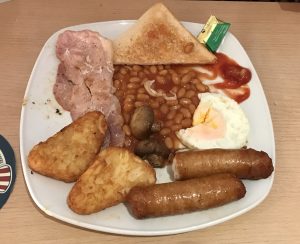 Today we visited Uncle Sam’s American Diner in Redcar. We sampled the Smokey & the Bandit Burger priced at £5.45 and the full English breakfast priced at £4.75, it clearly states on the menu next to the breakfast unlimited refills on tea and coffee, to then get to the till and be told you have to pay for the first one. Not really a huge problem but it’s quite misleading.

We waited roughly 15 minutes for our order, the breakfast was pretty much just a standard cafe style breakfast served with a choice of toast or fried bread, personally my thought with it being an American diner an English Muffin would have went down a treat, again not a big deal but it’s the little things. 2 sausages, 2 slices of bacon, 2 has browns, 1 egg a few mushrooms and some beans along with 1 slice of toast. Nothing really special to write home about, just a standard breakfast, cooked well.

The smokey & the bandit burger according to the menu is a 6oz prime beef burger with dry cure bacon mature cheddar crispy onion rings and Tennessee smoked BBQ sauce. The burger wasn’t the most flavourful we’ve had, I’d say it was frozen rather than fresh. The bacon was the same as what was served on the breakfast and that most certainly wasn’t dry cured. Far to much cheese was placed on the burger and it was that melted it leads me to believe the burger was microwaved, the BBQ sauce was a little to sweet rather than the advertised smokey flavour. This came served with chips which were doused in a chip spice, other than the flavoursome chips spice again not much to shout about, the chips themselves could have been left to cook a few minutes longer and then alongside that was a dollop of coleslaw which was probably the bet part of this meal. 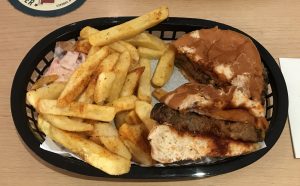 Overall this was a mediocre experience and is quite clearly just a standard cafe with American stickers slapped all over it. From the food we were served we feel it’s only far to award these an average 3 stars. 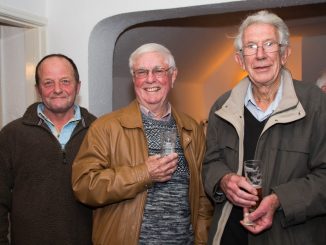 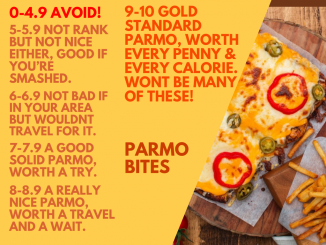 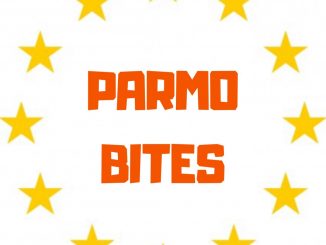